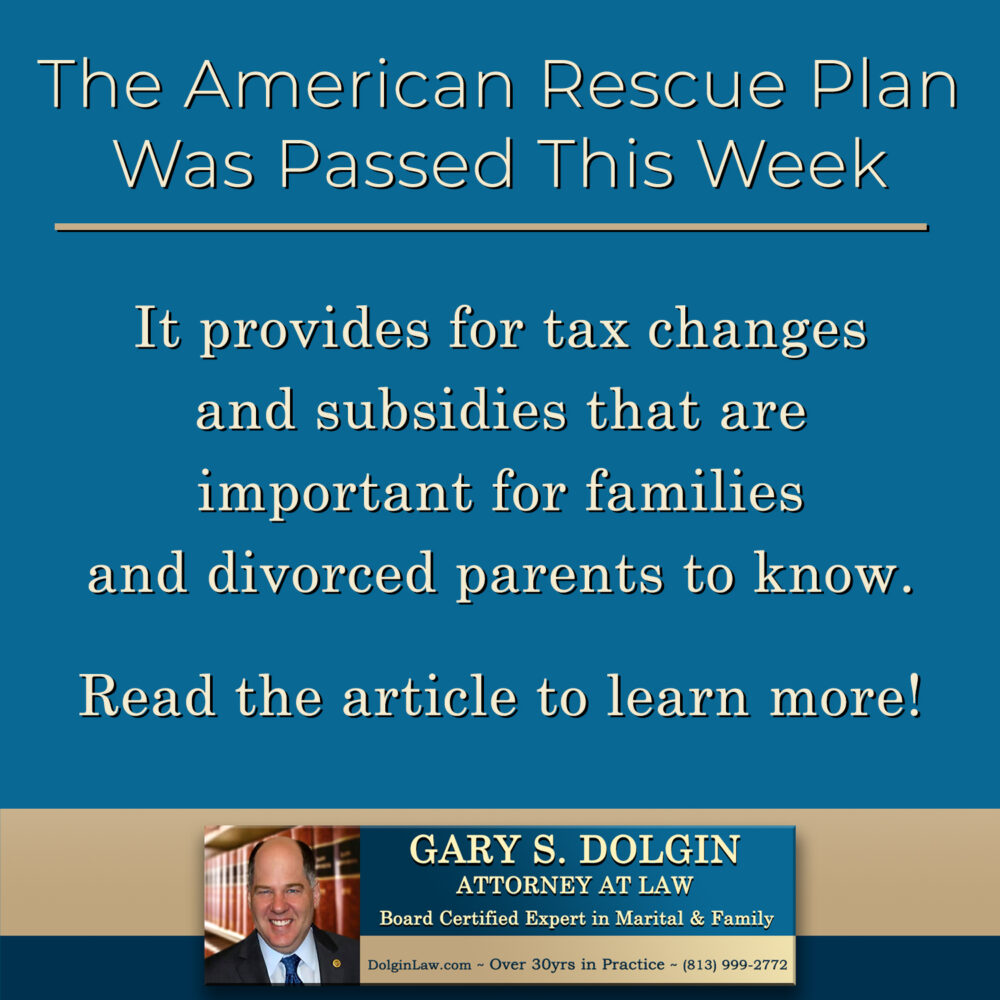 Latest News: The American Rescue Plan And How It Can Help You

The new stimulus package that was passed on Wednesday brings with it some tax changes and subsidies that are important for families and divorced parents to know.

In addition to stimulus checks of $1,400 per person, the relief package, known as the American Rescue Plan, includes some important changes to existing tax policy to help families with children who have been struggling to care for them as the pandemic closed schools.

At The Law Offices of Gary S. Dolgin, we are happy to see that help is on the way for families who may have been struggling during the pandemic and it is our pleasure to share the good news! Read the full article to find out more by clicking this link:
The American Rescue Plan

Here are some of the ways that bill will help the middle class:

This time around, Americans will receive stimulus checks of up to $1,400 per person, including dependents.

Those thresholds are lower than in the previous relief bills, to better ensure that those who need the checks the most receive them. But they will still be one of the biggest benefits enjoyed by those who are solidly in the middle class.

The relief package, known as the American Rescue Plan, includes some important changes to existing tax policy to help families with children who have been struggling to care for them as the pandemic closed schools.

The value of the credit will be calculated by taking up to 50 percent of the value of eligible expenses, up to certain limits, depending on household income. The law would begin to reduce the credit below 20 percent for households with income of more than $400,000.

After four years of being on life support, the Affordable Care Act is expanding, a development that will largely reward middle-income individuals and families, since those on the lower end of the income spectrum generally qualify for Medicaid. The relief legislation expands the subsidies for buying health insurance. As a result, a 64-year-old earning $58,000 would see monthly payments decline to $412 from $1,075 under current law, according to the Congressional Budget Office.

The legislation will now make upper-middle-income Americans eligible for aid to buy plans on the government exchanges, and premiums for those plans will cost no more than 8.5 percent of an individual’s modified adjusted gross income.

Another benefit to the middle class is that the stimulus package makes it easier for newly unemployed workers to get insurance through a federal program called COBRA, which allows people to buy their former employers’ health benefits. COBRA premiums will be fully paid for through September.

A Rescue for Pensioners

One of the more controversial provisions in the legislation is the $86 billion allotted to fixing failing multiemployer pensions.

The money is a taxpayer bailout for about 185 union pension plans that are so close to collapse that without the rescue, more than a million retired truck drivers, retail clerks, builders and others could be forced to forgo retirement income. The plans cover about 10.7 million active and retired workers, many of whom are middle class and work in fields like construction or entertainment where the workers move from job to job.

The legislation gives the weakest plans enough money to pay hundreds of thousands of retirees — a number that will grow in the future — their full pensions for the next 30 years.

But the measure has drawn criticism because the pensions were failing well before the pandemic.

View the full article at:
The American Rescue Plan